A History of Electricity 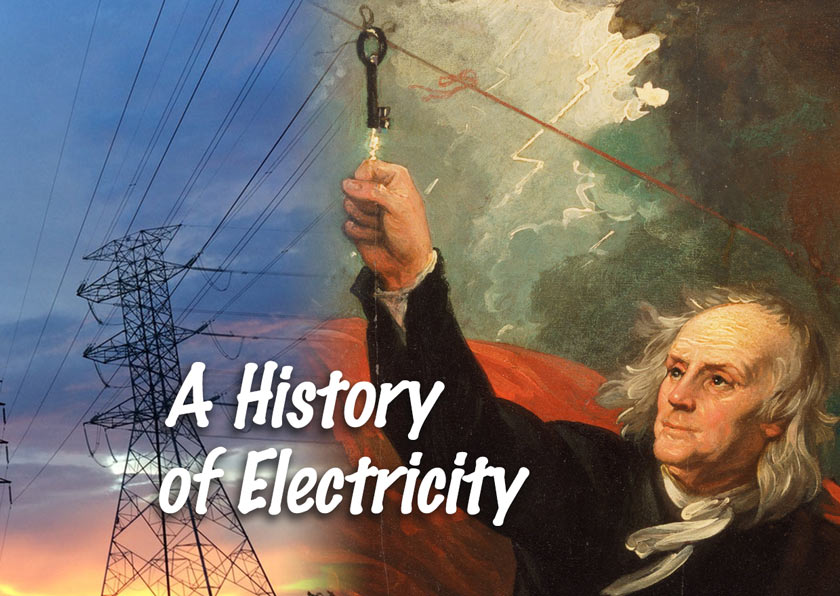 Electricity is a truly amazing innovation that most of us take for granted. Can you imagine not having it? Sometimes we may forget how most people lived without it, not so long ago. Even at the turn of the 20th century, most Americans lit their homes with candles or gas lights and heated their homes with coal or wood. These days, you flip a switch and like magic, the house is illuminated. Technology has come a very long way in a short amount of time. Ninety-nine percent of today’s technology is reliant on electricity! So, who are the geniuses we must thank for this and what exactly are the roots and history of electricity?

The earliest fascinations with electricity date back thousands of years. Humans all over the world have been amazed with the natural electrical currents that are all around us in the form of lightning and static electricity. However, it wasn’t until the 1700s that a key development in harnessing electrical power was made. That groundbreaking experiment was conducted by none other than Benjamin Franklin in 1752. His theory was that lightning was a source of electrical currents. Franklin wanted to prove it. His experiment involved tying a metal key to the string of a kite during a storm. He hypothesized that the electricity from the storm clouds would travel down the string to reach the metal key. He was correct and even received a shock! Luckily, he wasn’t seriously hurt by the electrical shock. That simple experiment got the ball rolling on what would become one of mankind’s greatest inventions.

Over the next century or so, many different inventors tried to find ways to produce light using electricity. Thomas Edison, one of the most notable inventors in American history and in the history of electricity, worked years on end to find the perfect way to produce light with electricity. By 1879, over 100 years after Benjamin Franklin’s experiments, Edison was able to invent the first reliable electric light bulb. Edison also invented a way to produce electricity with small electrical stations. Edison’s company, General Electric, is still around today! By the 1880s, Edison’s electrical stations were built in several U.S. cities. Although the amount of power produced was small, it was still enough to power several blocks of a city. It would take another 50 years before most people in large cities had electrical power. Even by the 1930s, the number of Americans in smaller towns, farms and rural areas who had electricity was very small: only one out of 10 families had power.

The Expansion of Electricity

Privately owned electric companies became common in large cities throughout the 1920s and 30s. As a business decision, these private companies decided it was much too expensive to run electrical lines to smaller towns and rural areas. In the mid-1930s, then president Franklin D. Roosevelt strongly believed that America’s farmers deserved to have the same access to electricity as the rest of the country. By 1940, the president’s efforts had been realized and nearly 40 percent of rural areas and farming families had electrical power and nearly 75 percent of all Americans had electrical power in their homes. Here in Tennessee, the Tennessee Valley Authority setup the Electric Home and Farm Authority. This new organization allowed farmers assistance with purchasing electric stoves, washing machines and other appliances.

Electricity in the 21st Century

Today’s electrical technologies have evolved into many different categories. Production of electricity has also evolved with the addition of wind turbines, solar energy production, geothermal energy, and hydroelectricity.

Even with all the electrification throughout the world, many places still lack electrical power. Over one billion people throughout Africa and as much as half the households in India don’t have electric power. However, nearly 83 percent of the world’s population has access to electricity.

We hope you’ve enjoyed learning a little about the history of electricity. The professionals at Gervais Electric are always on hand when any questions or electrical needs arise. Our electricians are licensed, bonded and insured. We also stay current on all continuing education and electrical codes. If you’re located in the Nashville, Franklin, Brentwood or surrounding Middle Tennessee areas, we’d love to hear from you! Give us a call at 615-963-1436 or send us a message below.

Choosing the Right Thermostat Option for Your Home
July 8, 2020

Steps You Can Take to Minimize Electric Costs
February 26, 2020

What is Phantom Electricity and How Does It Impact Your Electric Bill?
January 27, 2020

Learn How to Save Energy and Reduce Electric Bills with These Simple Tips
November 11, 2019